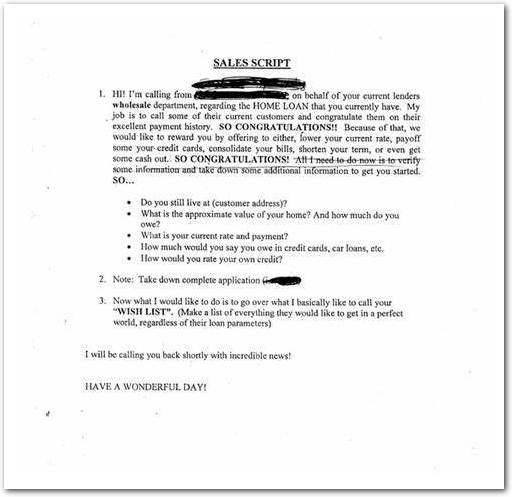 Well-developed telemarketing scripts will open doors that you never even knew existed...

So how come most telemarketing firms don't use psychological elements in their telemarketing scripts? Simply because this type of telemarketing script is psychologically and linguistically different; as human nature demonstrates, people tend to stick with what they know best and are hesitant to learn a new way of doing things. It also boils down to the fact that many telemarketers are not updated or trained on these new marketing techniques. The bottom line is simply ignorance and a lack of continuing, call center education.

So Why Is The Telemarketing Script Commonly Neglected?

A WAVE, NLP developed telemarketing script can also solve problems that may occur throughout the presentation. For example, a client of ours (a long distance service provider) had been using another call center for quite some time. They were not satisfied with the results they were receiving so they decided to give us a try.

The new telemarketing script increased the success of qualifying the prospect because they related to the question. Problem solved! Our new client's sales almost doubled ...literally overnight.

Ever Get A Call From A Telemarketer Who
Sounds Like They Are Reading From A Script?

I don't think there is anything more annoying, insulting and downright unprofessional; WAVE TELEMARKETING, telemarketers' are highly trained in script delivery. Our callers are skilled in responding to non-scripted interactions - they know how to listen as well as deliver the script. Our telemarketers pay attention to the the prospects use of words (visual, auditory, or kinesthetic) and deliver the script based on the prospect's predicate use. Another technique we use in script delivery is non-verbal methods, such as when to pause and listen, this helps build an instant rapport to get the action you desire from your prospects. We use the art of applying psychological selling skills in your telemarketing scripts and get the results you deserve! The right telemarketing script and offer are key ingredients in the success of your marketing campaign. Our talented telemarketing script development team has custom-tailored, innovative and compelling scripting for many of the largest corporations in the world - for virtually every industry imaginable!

Thank you very much and we hope to hear from you soon!  ED KINON- director: WAVE TELEMARKETING